People use Google very often, as a part of us that is present in our lives every day to help us find the answers we want.

In fact, the People Also Ask snippet (Other questions from users) is intended to provide quick answers to questions that users often ask about certain topics.

Ranking in related questions is a very interesting way to get traffic for your blog or site, but it should not be the end in itself.

According to Ahrefs, only 3% of users interact with the PAA box, which in turn appears in only 43% of searches.

Those are not encouraging numbers by themselves, but in highly searched or competitive words it can be a fundamental ally in the positioning of your site.

Do you want to know how to appear there?

What are Google related questions?

Related questions is a Google snippet that has been appearing in Google SERPs since 2015.

In its beginnings it seemed to be something very promising, today it seems that more and more people ignore it, although for SEO's it still has a lot of juice that can be extracted from it.

Its official name in Spanish is "Other Questions from Users" which derives from People Also Ask (PAA) of the original language of the search engine.

In fact, it does not always appear in the results, but it does so to a greater extent, both for occasions and for questions shown in the table.

It usually appears at the top of the SERP's although it does not have a fixed place, and may appear lower or higher, even on more than one occasion.

Without a doubt, appearing there is something privileged, at least for those who are far from ranking in the organic results per se.

Types of results displayed in Other user questions

The results shown in PAA can be of four types: Lists, tables, paragraphs and media.

Then I tell you what each one consists of and I show you examples.

As you can see in the image, this PAA result shows a list with the FIFA Ranking of men's teams. 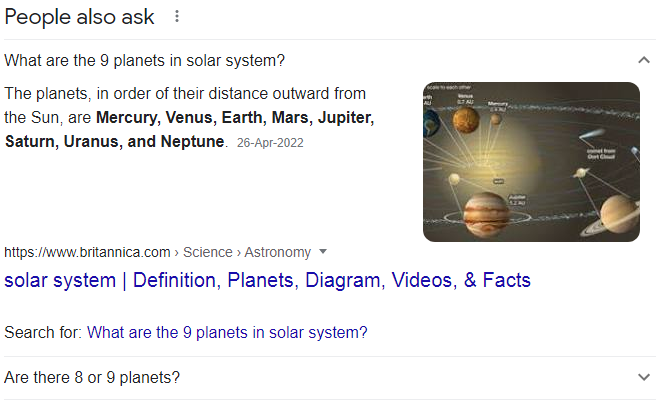 In this case a result in Table format, which shows the planets in two columns and the Obliquity of their orbit with respect to the ecliptic (please I hope I don't have to write that again 😂)

Below are the paragraphs that give some information through a set of statements that resolve the user's search intent.

Ideal for when asking something that cannot be listed or segmented into tables. 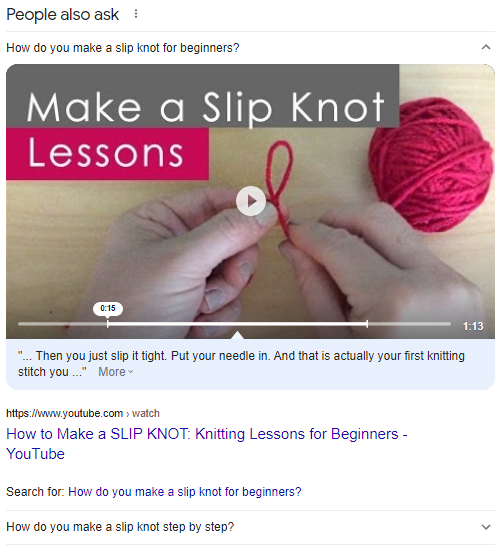 It appears in a much smaller proportion but sometimes a video can easily solve what a text cannot.

In this case a YouTube video on how to tie knots.

There are some benefits of appearing in Google related questions, the main ones are:

✅ You appear on the first page of Google, usually among the first organic results

✅ Appear more than once in Google results (organic and PAA)

❌ It is not a substitute for good organic positioning

❌ Not all queries give this kind of results

❌ Possibility that your answer will not drive traffic to your site

There are not many studies on PAA on the internet and even less in Spanish.

But I was still able to look at one of Semrush and extract some interesting numerical data.

Note: The data is from mid-2019, so it is not as reliable today. They can still serve as a reference

Guide and tips to appear in Related Questions

Here are some tips and tricks so you can appear at the top of Google, at least in the Other questions from users box.

If you are starting in this and everything seems very confusing to you, I recommend this post to learn SEO

As you may have seen before, those words that have a lot of search volume do not usually accompany the SERPs with the box of related questions, only 1% of them will have it.

In fact, if we attack keywords with few searches, less than 100 more than 6 of each search will get related questions.

Now you know which questions to attack and which not to attack in your content!

Questions: What, who, when, which or how

Searches that start with these words are more likely to have a People Also Ask response to users browsing Google.

It makes sense that a snippet called Other User Questions would have answers to just questions.

The longer tail, the more chances to appear in related questions.

Despite the fact that, as I told you above, the queries with a single search have a higher % of PAA, the vast majority of them are highly attacked by the competition and the longest tail words are not so.

Use long questions and give the answer that the user expects, there your chances grow exponentially.

Improve the responses of the competition

Your answers must be better than those of the competition. That sounds so obvious, but try to make your content so too.

That will help Google to assess all of your content and rank it, not just the question that will go to the PAA.

Use lists and tables

Lists and tables are highly revered by Google.

The best soccer referees, the best women's soccer teams, the ingredients of a paella, and endless other ideas that you can use to create lists or tables that help you to be at the top in Other questions from users.

Ask questions that cannot be answered in a few words

If a search can be answered in less than 5 words, then don't even try. Should not.

Why the user will never enter your website to see the answer if he can already see it there.

If they don't come to our site, they won't click on any ads or affiliate links.

Moreover, I doubt that the user will find your question, surely Google already answered it first.

Examples of questions that you should avoid wanting to rank: What is the capital of Uruguay? How old is Donald Trump? When was Pele born? among many other similar ones.

That your content and your site play in favor

Google will take your site as an industry reference (EAT) and will help position your questions above those of other sites that do not have your authority.

The more credible you are in the face of Google, the more chances you will have of being in the search engine's related questions.

In Conclusion: Is It Worth Ranking Other User Questions?

Although it is true that the PAA does not have the power to drive traffic as it did before, the truth is that it is still one more option to get users to reach your site organically.

Not every search that is made offers a box of related questions, nor every time that appears people usually click on them to enter to read the answer to the blog.

In fact, there are only a few times that we can receive traffic in significant amounts from PAA.

Still, the traffic you receive from Other user questions is because you already read an introduction to the answer you were looking for, that is, it is qualified traffic.

Therefore, think about it well in your SEO strategy and determine if it is important for you to appear in the box or not.

However, having said this, it is possible that once the user has found that answer, they will leave, since they do not need to browse our site because they surely do not have any other questions that have been raised.

In short, People Also Ask can be a good option when we are very far away or the competition is brutal to get to the first page.

But, being in PAA cannot be the end, the end must be to try to position the content in the organic results and try to keep your entire site climbing in the SERP's.

What Are The Differences Between On-Page And Off-Page SEO

Guide To a Complete SEO Analysis Of Your Competitors

5 SEO Tricks And Tips To Get Top On Google